The Company was founded on 1976 by Allan Wong and Stephen Leung in Hong Kong under the name Video Technology Ltd. Wong started as an electronics engineer at NCR before leaving and starting his own company. Vtech started with just 40 employees and began developing electronics devices based on microprocessors such as video games, since at the time were very popular. In 1978 the company changed its name to Vtech and launched its first video game based on the famous game Pong. In 1980 the company was quoted in the Honk Kong stock market in order to expand its potential and capital. The company soon expanded in electronics business and started acting as an OEM for others – this helped the company expand to the international market as a low cost electronics good. The boom came in 1981 when Sears commissioned Vtech to develop Children’s educational toys. Soon Vtech released their first educational toy called Lesson One, designed to teach the basic of mathematics and reading. The Toy was a huge success and established itself as a leader in children’s electronic education toy section.

The CreatiVision with it’s full range of accessories

All this success with their electronic products proofed to the company that the computer section will be dominant in the future and in 1981 Vtech released their first home computer-hybrid called CreatiVision. Their first real computer was the Laser 110 and was very similar to the ZX Spectrum, but in 1983 they released the Laser 200 with much more power and software availability. The Laser 200 in different countries was sold under different names such as Texet, Salora, and Dick Smith. Vtech also ventured in satellite receivers and in 1984 it released its first receiver for satellite, which was cheap and reachable by any home user.

In 1985 Vtech released the Laser 3000 which was an attempt to clone the Apple IIc, but an almost 100% compatible machine to Apple IIc came in 1988 with Laser128, which lead to a lawsuit with apple and later won by Vtech as the design was reversed engineered by Vtech without infringing Apple’s patents and rights. Vtech also ventured into IBM based PC market, and by the late 80’s Vtech released different PC’s under different brand names and continued to produce educational games with Sears and other department stores. Also in 1988 Vtech took advantage of the low cost salary in China and opened its production facilities in the Guangdong province. The target of all this was to dominate the global PC market. 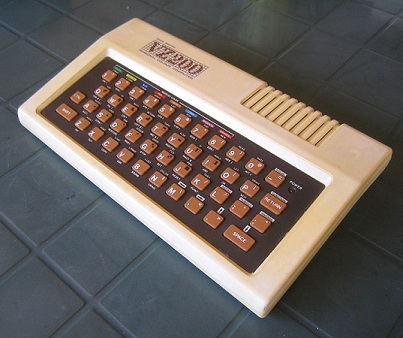 The Company had good response in Japan and North America and in 1990 eventually Vtech became a leader in both countries. As the company kept on growing, in 1991 Vtech set to dominate also the European market by removing their stocks in Hong Kong and register them in the London stock exchange with the aim of selling PC’s in European countries. The company sales under Vtech, Laser, and Leading technology brand name started losing ground as they got caught into a price war. To compete with the other companies they started reducing its product prices, but another battle was starting, that to keep its space shelving in stores. Not to lose any more money from this sector they were forced to start selling their computers directly, as Dell and other major companies where doing at the time, but was already too late. As a drastic measure Vtech ceased to produce their branded PC’s and instead they started to produce computer components for the OEM market. This was also insufficient to regain their past success in the PC division and Vtech was forced to sell out the computer division keeping just a small part in the Honk Kong PC division. To make things even worse the Satellite market was also falling out and in 1993 the division was closed.

This helped the company to gain more profit and when in 1998 Hong Kong was hit by a market crisis Vtech was still in profit. In the new millennium to be exactly in 2000 Vtech bought Lucent own manufacturing telephone company for $133 million, and settled their manufacturing plant in Mexico, but the company soon found out that Lucent had previous problems which were hidden when Vtech was acquiring the Telephone Company. Eventually Vtech sued Lucent for $170 Million and in 2001 Vtech made substantial loses. This did not discouraged the management and set up a new project by releasing a new range of cordless phones working on 5.8 GHz and setting new standards in the US telephone market. Vtech started new negotiations with AT&T for exclusive rights to the brand in china and non-exclusive rights to market AT&T branded telephones in Europe and the Latin American region.

In 2005 Vtech returned as a profitable company with sales over $1 Billion. 60% percent of the profits were from the Telephone Company and the rest from its electronic learning aid division. Although the Telephone Company was doing well Vtech continued to develop educational electronic devices despite the harsh competition. On August 2004 Vtech released V.Smile “TV Learning System” an educational console that uses a standard TV set as a display screen. V.Smile was a great success especially with the new deals with companies such as Disney, Marvel, Warner Brothers, and Hit Entertainment. All this lead the company to design the V.Smile handheld console and was launched in 2006. In the meantime Vtech also launched a VoIP telephone system in conjunction with Vonage which also was a great success in the business market.

Vtech positioned itself as a leader on both two core product categories setting up standards worldwide, with more than 30 years experience in different categories such as telephony and educational products. Vtech achieved awards for its great success and also started developing phone systems for hotels and offices. Today Vtech is a well established company with more than 20,000 employees and revenue of over $1 Billion.