Tandy RadioShack was founded in 1919 at Fort Worth, Texas by two friends Northon Hinckley and Dave L.Tandy (1889-1966). The initial company name was Hinckley-Tandy Leather Company and sold leather shoe parts to shoe repair shops in the area. Two years later in Down Town Boston Radio shack was forming up by two brothers, Theodore and Milton Deutschmann. The Name Radio Shack was chosen for the term of a small wooden structure that housed a ship’s radio equipment and thought that the name was appropriate for the needs of radio officers aboard ships, as well as ‘ham’ radio operators. By beginning of 1921, RadioShack grew to a handful of stores clustered in Northeast, and became a leading electronics mail-order distributor for hobbyists.

In the meantime at Fort Worth, Hinckley-Tandy Leather Company although the great depression due to World War II, the company grew modestly. Mr. Tandy’s oldest son, Charles D. Tandy (1918-1978), while serving the Navy during the war, observed how leather craft was used as a therapeutic tool for patients and by servicemen in recreation and rehabilitation centers. He informed his father that leather craft was the way to steer the company during the hard war years. In 1947 Charles Tandy returned home with many projects in mind. The Hinckley-Tandy Leather Company was a five-store and mail-order catalog and with annual revenue of $750,000 in annual sales, Charles was not satisfied and he was sure that the company can do more with the high gross-profit margins of the leather craft business and the growth possibilities of the leisure-time hobby market. After a long dispute with his father partner, Hinckley kept the shoe business, and the Tandy family formed Tandy Leather Company.

By 1954 the company was providing leather parts and tools for production of wallets and other items. By this time the company had grown to 67 stores in 36 states including Hawaii and with sales of $8 million. Although successful, the company had reached a point where coping with estate and management problems inherent in a privately held family business dictated selling the enterprise to gain a listing on a major stock exchange to attract investors and finance expansion. Tandy Leather Company was sold to American Hide and Leather of Boston, which changed its name to General American Industries after the merger. After an unsuccessful acquiring, the firm soon found itself in financial trouble, and profits from the Tandy organizations were used to cover losses of the parent company. Tandy began a struggle for total control of the company and after four years Charles was elected chairman of the Board in November 1959.Charles moved the headquarters to Forth Worth the following year, and changed name to Tandy Corporation. On November 1960 the company’s stock began trading at the New York Stock Exchange under the symbol TAN. RadioShack continued to do quite well and in early 1940 they issued their first catalogue. In 1947 the company entered in the High-Fidelity field and opened the nation’s first audio showroom. In 1954 RadioShack began producing its own products under the name of Realistic®. 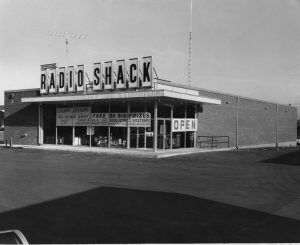 A typical RadioShack shop in the 60’s

By the 60’s RadioShack had expanded it’s stores to nine and was leading distributor of electronic parts and products around the world. Despite the success the company soon was in financial difficulties, due to poor practices. Charles Tandy saw the small RadioShack chain an excellent opportunity for rapid growth, and he bought the almost bankrupt company in 1963 for the equivalent of $300,000 cash. Since that day RadioShack has grown to a nationwide network of stores with revenues of $4.6 billion. The 70’s was a time of opportunities and incredible growth, not only for the number of stores that were opened, but also in quality and sophistication of products. In 1975, Tandy Corporation became exclusively an electronics company after it stopped operations in Tandy crafts and Tandy Brands. 1977 was the introduction of the first mass production of personal computer code named TRS-80 microcomputer. Instead of the build it yourself style that dominated that time, RadioShack introduced a personal computer fully wired and tested. It was so a success that the company had a backlog that lasted for months. Over 200,000 TRS-80 Model I computers were sold from 1977 to 1981. 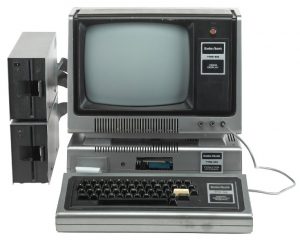 The 80’s was considered one of the biggest companies in little computers, and in addition, RadioShack offered the best affordably priced stereo receiver with digital technology, and the first mobile phone that consumers could install themselves, not to mention the first satellite TV system that could be installed by any electronic enthusiast. On July 1983 Leonard H. Roberts joined the company and was appointed as president. Roberts changed the structure of the company with innovate ideas and support. The focus on connecting people with technology resulted in a complete success which helped the company to expand even more. Another great success was a two way radio license free which helped RadioShack to sell more wireless than any other retailer.

The 90’s the company responded to the growing consumer preferences for brand-name products and services. Along with Spirit PCS, Verizon Wireless service and Hewlett-Packard computers the company could offer devices such as PDA, MP3 Players and other home entertainment products. This has helped make RadioShack even more relevant to a new generation of consumers and exposed them to the superior customer service RadioShack is known for delivering.
In 2000 the shareholders approved changing the name from Tandy Corporation to RadioShack Corporation to focus more on one company with one vision. The company’s New York Stock Exchange symbol officially became RSH. 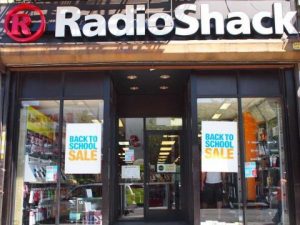 One of the many stores RadioShack closed down

Today, RadioShack offers a vast variety of products from batteries to the most sophisticated device on the market, with the best after sales service in the world. Unfortunately the company filed for bankruptcy for the second time in March 2017, and had to close down and sell  1,000 stores leaving just a mare 70 stores open.