Commodore has played a very important role in the technological history. Thanks to Commodore and other companies, Computers were now accessible to all. The Idea of having a personal computer had now become a reality for millions of people, due to reasonable price. In 1994 Commodore has been liquidated but still has many followers and recently other retro suppliers started creating their own products with the Commodore logo. We don’t know about trade marks legality for such devices but as long as there are companies and startup’s producing these items means that there is a huge demand for them.

In 1954 Jack Tramiel founded Commodore as a typewriter repair service. Jack Tramiel was Polish, and after Auschwitz he traveled to the United States and joined the Army. After the army he decided to open a repair shop in the Bronx. Tramiel always had an inclination towards technology such as mechanical and electro-mechanical equipment. Tramiel Moved again in 1955, this time to Ontario, Canada becoming a low-cost office furniture manufacturer. In the 70’s there was a boom in the calculator and digital watches and although Tramiel ventured in this area in 1976 Commodore was on the edge of insolvency. Tramiel was saved by Irving Gould by lending him three million dollars and purchased MOS technologies. The acquisition was key to Tramiel’s philosophy of vertical integration. Production and distribution controlling was essential as Commodore kept its costs very low and it’s products competitive. As production costs started to raise, Commodore was again transferred to the Bahamas in order to take advantage of lower taxes, and broug

ht the company back on its feet again. The headquarters and manufacturing base was in California. The idea in the 70’s was that the future of computers was in databases which were accessed via terminals.

The Commodore PET with cassette integrated and its strange keyboard design.

Desktop computers and affordable models were still a far reached idea, and Tramiel refused to accept this. Determined as he was, in 1977 Commodore introduced the PET (Personal Electronic Transactor) which was designed by Chuck Paddle(for more info see article Chuck Paddle) and it was sold at $795. By the time PET was put on the market there were other competitors such as Tandy TRS-80 and Apple II. Always keeping the idea of ‘User-Friendly’ PET was composed of a Monitor, Keyboard and a Tape Drive which were housed in a plastic case. 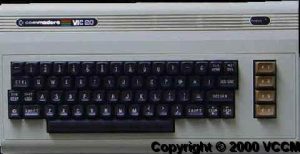 The Vic-20 with its beige function keys button. The same keyboards were used in the first production of the Commodore 64.

The Vic20, with its 5K Ram was introduced in 1981. The Vic often ran out of memory before users finished writing their programs. Still the production reached up to 9000 a day, and 1982 it’s sales reached up to $305 Million. Commodore’s hit on the market was the Commodore 64. Like the Vic 20 it came without a Monitor but it had 64K Ram. The sales reached nearly 22 Million Units in 1983. The market share of Commodore had become twice that of Apple and Tandy. Also in 1983 Commodore introduced the SX-64 which was a portable computer and 1984 the Plus/4 was introduced with integrated software in Rom. The Largest revolution was the Amiga 1000 with 256 Ram.

The Commodore SX64 at the time computers started to come out as portable devices and was considered the top.

The price for this Computer was $1,200, a though competitor for the Multimedia systems. The Amiga had many features such as built-in speech and text-to-speech conversion. Also Monitor could display multiple screens at different resolutions. The Concept of home entertainment system was helped with the built in outputs for TVs and VCRs. Although Amiga 1000 had all these features it not reached the scope Tramiel wanted, as Amiga was considered as a gaming machine. Still the company went towards the billion-dollar mark. Things were not going as they should and debts increased. In January 1984 Tramiel sold his share but his past was never filled adequately. Irving Gould was Commodore’s new reigning CEO failed to grasp important industry trends. This caused commodore in isolation. Gould and his president Mehdi.R.Ali failed to understand the true nature of computer industry. Marketing was done through word of mouth therefore consumers were never informed about Commodore’s largest innovations. Commodore 64 had no marketing plan but still it was a great success. They wanted to do the same with the Amiga but circumstances were different.

By this time (1986-87) IBM had conquered the market and Bill Gate’s Microsoft Windows catered for PC Compatibles. Apple introduced Macintosh, and Software markets started to show interest in IBM and Apple Computers. Although Commodore tried to put on the market add-ons which could allow users to run Macintosh and IBM Software, but it was to late. Loyal Customers continued to purchase Commodore computers, which were continuously upgraded, but IBM and Apple had by now dominance in the computer market. For consumers who were not very enthusiastic with computers, in 1992 Commodore put on the market the Commodore Dynamic Television (CDTV) that played games and CD ROMs on normal TV Set. The successor of the CDTV was the CD32 with 32-bit memory. Although it was superior to products by Sega and 3DO, the CD32 did not reach the desired results. This time there was a more studied marketing plan, but the budget was still low.

Amiga was the shining star, used by New Tek Inc’s Video Toaster a well Known video production tool. It was very much sought after by film and television studios but it was not enough to help the company back on its feet. The decline of Commodore reached its climax in 1993 with the loss of $357 Million. The Company made big efforts to keep its engineers, and keep the business running but these efforts were useless and in 1994 Commodore Closed it’s doors forever.

On April 8 2012, The Founder of Commodore Jack Tramiel age 83 died. His last appearance was on the C64 25th Anniversary show. He was considered as one of the crucial figures in computer history.