Alan Sugar with his products in the early 70’s

On April 1968, Alan Michael Sugar founded a small company Alan Michael Sugar Trading and started to sell HIFI from a small van. In the beginning of the 80’s Alan founded a company named Amstrad and started producing Home Computers. The name Amstrad was taken from the previous company name Alan Michael Sugar Trading. Amstrad wanted not only to bring one computer, but four computers on the market. In the previous year Alan contacted some engineers to design a computer. Alan intentions were to design a computer and at the same time produce software for it so that software was available at the time that the computer was launched, and a system which included a monitor and a tape deck. 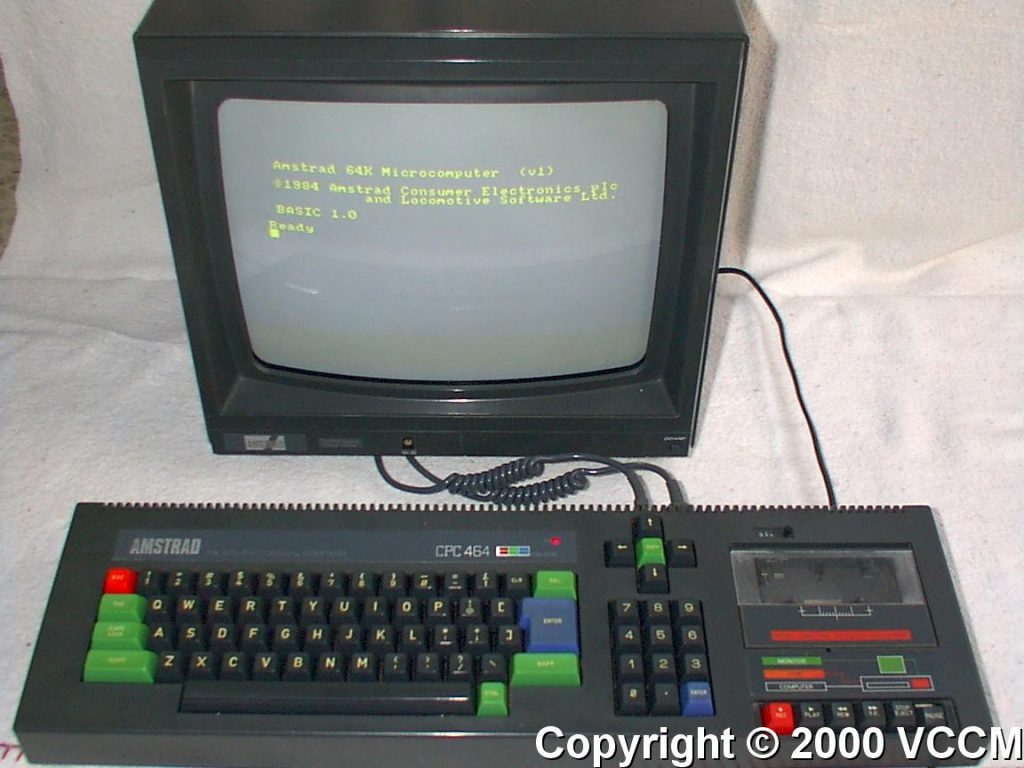 The CPC464 with monitor and build in cassette tape

At this time tape decks and monitors where sold separately. In order to achieve these designers incorporated with the system the monitor and tape deck. The Monitor supplied all the required power of the computer, monitor and tape deck, which formed part of the main computer. The initial prototype was code named Arnold, and was built around a 6502 processor with 32KB Ram. Amstrad needed a good programming language and since Basic was the most used they opted for this programming language. Rather then license Microsoft famous version of the language, Amstrad contacted 50 software houses to see who will produce the software for this machine. Finally Locomotive Software was chosen to design a new simple system, but the software firm suggested using the Z80 processor since the 6502 was too slow and to increase memory to 64KB. With this new processor, Amstrad went on to create the disk operating system code named Amsdos, which used CP/M. On its launch the machine was named to CPC 464. Cosmetically looked funny with its long thin case, tape deck incorporated and garish red, green and blue keys. The CPC 464 showed a number of faults, such as slow unreliable tapes, no sprite capabilities, and lack of memory. The Machine was also shipped to other countries such as Germany, Spain and France. In Spain the name had to be changed from CPC464 to CPC472.

The CPC472 really had 72KB but the extra 8KB were inaccessible. The extra memory where included since the Spanish government was so unhappy that the keyboard did not included the tilde (~) symbol that a Tax was implemented on machines under and including 64KB. This forced the importers Indescomp to ask Amstrad to add extra memory not to pay this tax. This was only for a short time since the Spanish government changed this Tax to all imported machines with non Spanish keyboard. Amstrad had to redesign the keyboard and keep the extra 8KB since production for the CPC472 had already been started.

The Schneider CPC6128 was a rebranded Amstrad CPC6128, and very similar in appearance.

By 1985 things where picking up. The company was producing its machines to Schneider which in Germany was selling quite well. Any games released for the major companies such as Sinclair and Commodore were also released for Amstrad. By mid 1985 the company was the third established play for the 8-bit market, and released the CPC 664 with the same Basic, updated to version 1.1 for backward compatibility and a 3 inch Disk Drive. The cursor keys and keyboard where redefined to look more professional. In less than a year the system was killed since the 64KB was still not enough, and was replaced by the CPC6128 with 128KB of Ram. The keyboard was once again redesigned with a more compact keyboard. The drawback of the 664 and 6128 was the Disk Drive. The 3 Inch floppy disks were very expensive compared with other floppy disks, only few suppliers stocked these type of disks and they could only hold 178KB of data. Other companies produced standard floppy drives but no commercial software was produced for these drives. In 1986 when Sinclair was in crisis due to the QL failure, Amstrad bought all the technology and trademarks of their home computer line which included the exclusive rights to produce these machines. With little success on the Spectrum market and CPC series, Amstrad ventured in the IBM market. Amstrad released systems such as PC1512 or PC200 for the Spectrum, PC1640, PPC512 and PPC640. This helped Amstrad to keep the company on its feet. Schneider in the meantime went different ways. The company introduced their Euro-series.

In June 1990 Amstrad made a shocking announcement that the CPC series would be discontinued, and instead a whole new version of computers will be released code named Plus series. The most of the design was taken from the Atari ST and Amiga computers. The Plus range was also backward compatible with the CPC range. The tape deck of the 464 Plus, and the disk drive of the 6128 Plus where moved behind the keyboard, and to compete with Sega and Nintendo in the Plus series Amstrad included a game console. The Plus range included a cartridge port compatible between the three systems, but Amstrad to control games did not grant access to the improved hardware, which resulted in loss of new software. In 1993 the Plus range were not selling at all, especially the console that was selling for just $30. Software houses started to knock prices down and clearing their stock as bargain software, but thanks to a small bunch of programmers they started to produce games, which kept the plus series and the CPC series alive for a couple of years. Amstrad continued to produce IBM compatible PC such as the PC2086 and PC2286 which where mostly sold to small companies and shops.

At the end of the century Amstrad plc manufactured a great range of consumer electronics products, such as telephones, satellite receivers, CD copiers and video recorders and was bought by SKY in 2007.  The Schneider AG on the other hand, sold PCs and peripherals as OEM. However in 2002, Schneider went bankrupt.